In 1981, he was signed as a works driver in Formula 2. In 1985, he won the FIA Formula 3000 Championship and subsequently competed in Formula 1 as a member of the Osella, Arrows, Zakspeed and Rial teams.

He then went on to contest the German Touring Car Championship (DTM), the Endurance World Championship and the 24-hour races at Le Mans, Spa and the Nürburgring.

He was just as much at home in the American IndyCar Series, where he was first a driver and then a team principal, as in Formula Nippon (Japan).

From 1998 to the present he has been co-commentator and Formula 1 expert at RTL.

In 2005, Christian Danner was appointed Director of the Jaguar Land Rover Driving Academy in Germany.

In 1999, he won the German Television Award for his expert commentaries and was nominated for the accolade again in 2012 and 2017.

He has also received a Golden Gong for his TV work.

Danner was further honoured by the German police in 2001 for his services to road safety with their GdP Star Award. 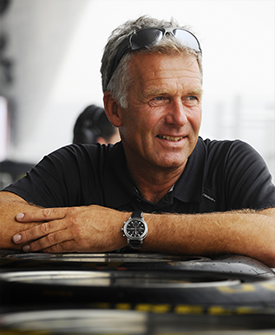